The trailer looked like a mix of CSI, Sci-Fi, Mystery, Thriller, Scary Movie and Comic Book. The cinematography is outstanding. It’s also the first series to be released and distributed via the web like this. I always have a couple extra bucks in my PayPal account from kind readers who appreciate my Plugin development. I sometimes pass that on to other folks or I treat myself to something. Tonight, I’ve treated myself to the first webisode of Sanctuary. 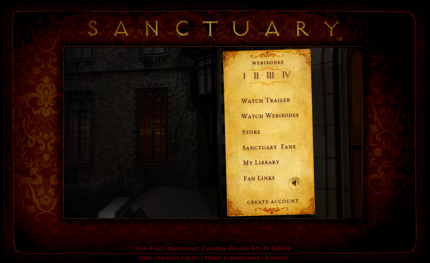 Malam ini juga my son’s friends’ ‘cooking night’. Safer than last week when they burned Indian food, my son’s friends cooked pancakes for anyone who wished to come over. They cooked about 200 pancakes and we had a dozen or so teenagers coming through. They washed them down with Mountain Dew (of course).

After a pancake dinner, I downloaded the first webisode. I converted it from a Quicktime .mov file to an AppleTV .m4v file using Quicktime Pro on my MacBookPro. I then imported it into iTunes on my laptop and wirelessly sync’d it to my AppleTV. Once there, I watched it on my Television!

How cool is that? I’m pretty sure this is one of the geekiest things I’ve ever done! Oh, and Sanctuary is wicked cool. I’m looking forward to the next webisode!

Hat Tip to Steven at WinExtra. And there’s a Blog Sanctuary!